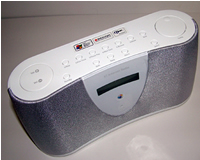 With last week’s launch of it’s TV over the Internet service, a raft of integrated net-based services and a slew of new hardware devices, BT has relauched itself as a multi-media service provider instead of a plain old utility company. The BT Internet Radio shows another face of BT’s rebranding. It’s a slickly designed consumer electrical product aimed directly at the growing digital radio sector.

The design of the device itself echoes Apple’s trademark austere, white aesthetic. Organically shaped, it has no straight edges or corners and is slightly flared towards the base. Wraparound silver mesh panels add some contrast and a front centred LED displays information in a soft blue light. On top are a series of quite ‘plasticy’ buttons. Two larger buttons provide volume control and menu navigation and various others control playback, station memory, alarm and other functions.

Setting it up is a breeze. A simple press button starts the device scanning for your wireless network. You log on using the scrolling navigation button to enter your normal network password and the radio takes care of the rest.

Once online, stations are accessed through the same navigation button. They are grouped by location or genre, though there doesn’t appear to be a way just to browse all available stations. A series of sub-menus gives access to the features of each station. A choice between live and on demand material is visible where archived material is available. This means you can access services like the BBC’s listen-again service, picking programmes from all the recent BBC broadcasts for the last seven days. More sub menus allow you to choose programmes and days where appropriate.

Choosing between stations is a bit of a hit and miss affair. If your tastes tend towards anything beyond the mainstream categorizations (rock, pop, dance, hip hop etc) you’ll struggle to find the music you want to hear. This, of course, isn’t BT’s fault. The device uses the Reciva Internet Portal to aggregate its stations. If you access the Reciva Website (Reciva) you can find some more detail on the content of stations but, since Reciva (like the Gracenote database) allows users to add information there are some frustratingly arbitrary categorizations. That said, there are over 5000 stations available and, once I located Resonance FM under the experimental section I was happily listening to an assortment of droning and scraping, Bollywood soundtracks and post-modern poetry.

Sound quality is quite adequate and better than that produced by most internal computer speakers. The sound is deep and clear with none of the echoing or breakup that DAB radio is prone to. There are, however, a couple of niggles with sound adjustment. There is no way to adjust bass or treble and the volume control does not automatically increase when held down, meaning you have to keep pressing to raise or lower volume. Unlike DAB, the radio doesn’t display any info (such as such as track titles) about the source.

Using the unit was no problem though there were some irritations. It tends to hang on to the last programme played and starts up replaying that every time. In the case of a live station that’s ok but for archived content it can become annoying. The radio is also subject to same problems you would encounter with any wireless device: proximity to router and the number of walls in between can affect reception. I noticed a tendency for buffering in most locations in which I tried. Access to a signal is entirely dependent on your internet connection being on. My router drops the line when it isn’t in use therefore the auto-play alarm function is no use. When the unit reconnects to the network after being switched off, it uses the saved security key however I found that often the logon failed a second attempt was required.

The device can access and playback MP3 or other audio files from a networked PC. An extremely useful feature and one that really capitalizes on the network power of the unit. It probably would have done the most to sell this device to me. In practice it was unable to connect to my PC so I had to leave the feature untested. Typically, macs are not supported and I was unable to access my sizable MP3 collection via either of the macs on the network. It’s not surprising that BT have chosen to adopt Windows technology for integration with computers but it is disappointing that they couldn’t have adopted an interoperable standard which would have supported any operating system.

Given that Windows-centric tendency I wonder exactly who the Internet Radio will be useful to? On one hand it brings a host of Internet radio stations and a variety of useful services and features into one portable unit. It’s easy to set up and use and, in the right circumstances, has the potential to integrate with an existing network to provide extended access to shared music files.

On the other hand, it is only Windows compatible and therefore restricted in terms of both OS and DRM technologies.

If you are already streaming audio over your wireless network, there isn’t a whole lot of extra functionality in this box. Since a wireless network is a necessary prerequisite for the unit to work, I have to wonder how many people will find it sufficiently superior to their existing methods of playback to make it worth the £120 price tag.