As we’ve been covering for ages, Korea is super forward in many things electronic.

DRM systems are used to restrict what people can do with their digital media, normally audio and video. This pleases the content owners considerably, but consumers are finding it frustrating that media they are buying on one service will not play on all of their portable music players – eg music bought on iTunes cannot play on a non-iPod player.

By making DRM system interchangeable, the hope is that everyone remains happy – the content owner, because the content stays ‘protected’ by the DRM and the consumer because they have the freedom to move it to any playing device they have. 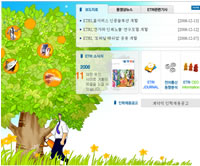 The Koreans are achieving this by the EXIM standard for online and mobile music service. EXIM stands for Export/Import which was developed Korea’s Electronic & Telecommunications Research Institute (ETRI) and INKA Entworks. It should be wide reaching as up to 90% of online music sites and 70% of portable music devices deployed in Korea at the moment use DRM solutions based on the EXIM standard.

What differentiates the Korean mobile music market is that all phones sold since 2003 have a USB connector, which is used to transfer music they download via their computers, to their mobiles. This is sometimes called sideloading.

SK Telecom, the largest mobile provider in Korea as finally agreed to open up their handsets and service to allow music from third party services to be used. Until now only content authorised by SK could be loaded onto their phones.

James Ahn, CEO of INKA Entworks, was clearly excited at the prospect, “SK Telecom’s decision to implement the EXIM standard is an important milestone because of its dominant position in the mobile phone services and online music services markets. We’re happy to have SK Telecom as a partner.”