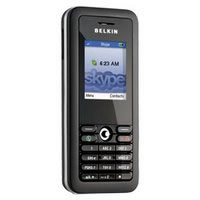 It’s coming up to Xmas and everyone’s making Skype accessories. Belkin are no exception and have joined the crowd to release a Skype phone, in BLACK.

It’s not really a phone in the normal sense, just an embedded Skype client on dedicated hardware.

It’s Skype, but not as you know it
Skype on a PC environment is more functional, for a start this phone version doesn’t allow text instant messages (IM), it only supports the voice functionality of Skype (even though the keyboard does allow text input, much like a mobile phone except no predictive text).

Once the device is configured, the screen will display the current time and your Skype balance with two softkeys at the bottom of the screen showing “menu” and “Contacts”. 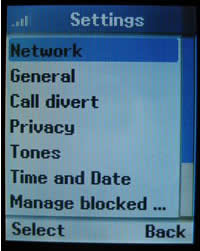 If you’ve got credit you can make normal calls to the PSTN (i.e.ordinary phones), but you have to type the telephone number in international format (i.e. putting +44 infront of the number and dropping the leading zero). Unless you’ve got a SkypeIn number, the called phone will show “Number Unavailable” when you call.

Dialing contacts is easy, just hit the right soft key and they’ll be listed, go to the one you want and hit the green “dial” button (or you can use the left soft key which will show “options” and then select “call”). You can also leave them a voicemail (if they have thatservice) or view their profile.

WiFi isn’t HiFi
Call quality is pretty good, though it’s reliant on both the WiFi and Internet connection which can both vary depending on the environment.

As a WiFi phone, it’s permanently connected to the Internet whether it’s being used or not and though it can blank the screen, the Skype client is running all the time the phone is on, which means it’s eating into the battery life.

Though using the phone will increase the rate the battery discharges, WiFi isn’t particularly battery friendly. Saying that, after a full charge the phone lasted at least 20 hours before turning itself off. 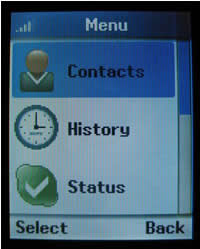 Phone Set-up
Setting the phone up is easy, but not trivial. It works through a WiFi connection so that the first thing that needs to be configured. The network should be configured with one of the WiFi security protocols (and if it’s not, do it NOW), the Belkin phone supports WEP and the newer more secure WPA protocols. The IP configuration will be automatic if the network is configured to dish out the settings (most are) though they can be entered manually.

Once the networking is configured, just enter the Skype log-in details and the client connects to the network, and just works.

All in all it took less than 2 minutes to make the first call – even with the pretty slow text input.

The phone software can also update itself over the network, but no software updates have so far been made available.

Internals
Though Belkin don’t say what’s in the phone there’s some clues from the copyright notices. Of course there’s Skype in there, but the P2P stuff is licensed from Joltid (who seem to be the company behind the technology in Kazaa etc and Skype too).

There’s also Qt licensed from Trolltech. Qt is a cross platform user interface available on Windows, MacOS and Linux. As the phone is unlikely to run either of the first two, it’s probably running embedded Linux, and Trolltech make a version of that too called Qtopia. So as a bet it’s running some variant of embedded Linux, Qtopia, Qt and a Linux variant of Skype. 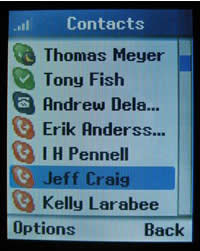 It’s not perfect
The current phone isn’t perfect, the phone settings are static and are designed to work in a fixed home or office environment and are tied to a specified WiFi network.

As the phone doesn’t have a browser it’s not possible to utilise a public hotspot as there’s no way to enter your credentials to get on-line.

Belkin have said this will be possible with the next version which will have a Java micro-browser which will allow configuring hotspot settings and saving them too so it will be possible to configure the phone in a Starbucks then move to an Openzone network and the phone will continue working.

The phone costs around £99 which isn’t cheap, but having a Skype phone that isn’t tethered to a PC makes it usable whenever it’s needed.

Verdict
It’s a nicely built phone, though the screen’s a bit small. The most annoying thing is not being able to “chat” to people and other Skype users just get a message that the software’s to old or incompatible if they try to chat with you.