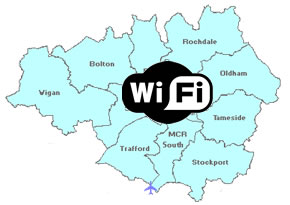 Manchester City Council is considering a plan to bathe up to 400 square miles of the city in WiFi, creating the largest WiFi network in Europe in the process.

Using Mesh boxes attached to lampposts and buildings, the intention is to eventually cover a stunning 90 percent of Manchester’s population, around 2.2m residents.

Sensibly they plan to start with an-already pretty ambitious 100 square-miles and best of all, access to basic service would be free, with higher speed chargeable.

The initiative is part of Manchester’s bid in the government’s Digital Challenge Initiative, a competition that will select a region to qualify for up to £3m in funding.

Manchester City Council Leader Sir Richard Leese said: ‘We have been inspired in our plans by the success of wireless and broadband networks in other leading cities around the world, such as San Francisco and Amsterdam.”

The council is requesting representation from private companies to work with them and they intend to bid for The intention is to eventually cover a stunning 90 percent of Manchester’s population.

Where this puts private companies that are planning to independently provide WiFi to cities isn’t certain. Pipex recently announced that they planned to roll out WiMax in eight UK cities by 2008, including networks in London and Manchester.