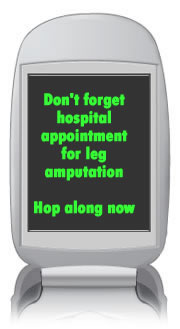 For a long time Health Authorities have been having kittens about the amount of people who miss their hospital appointments – and quite rightly, it’s a tremendous waste of resources, that are already stretched.

Many of the missed appointments are due to genuine mistakes where the person due at the hospital suddenly remembers that where they were supposed to be.

If this has happened to you, you’re part of the 15% that do it too.

Those afflicted with this, will be able to breath a sign of relief thanks to the combined power of Orange, iPLATO with their Patient Care Messaging, and Ealing Primary Care Trust, well, at least if they live in Ealing they will be.

Orange being involved with the project points to the means of delivery. SMS reminders will be sent to patients mobile phones automatically, thanks to the integration with the patient administration systems, already used by GPs throughout the borough.

To take part in the free trial patients register their mobile phone numbers at their surgeries.

Orange is involved through the partnership they’ve had with iPlato since 2003. They’ll be sending out the ton of SMS’s that the system will be spitting out – think of the deal like them having sold the health authority a _huge_ bundle of SMS’s. Although Orange is heading the deal, messages are sent to all networks – be a bit daft otherwise wouldn’t it? 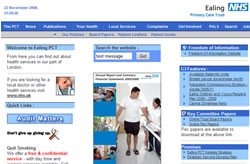 It’s not just appointments that can be handled, Orange tell us that, “Among many benefits, text messaging prompts a better response to health promotion campaigns such as invitations to receive flu jabs or attend asthma clinics.” The word promotion could be worrying if abused.

Set at the right level of frequency, this kind of reminder is currently helpful, but any Doctor’s service that starts to abuse this by sending too many messages can be sure to get their patients unsubscribing from their service.

Mulling this over we thought that while it is a great first step, isn’t it a bit amazing that this hasn’t been done before?

Far smaller organisation have been using this idea for quite a while. Sal, my wife receives SMS reminders from her hairdresser (Jaqs of Newport – BTW can we have her hair cuts cheaper if I plug your shop?) the day before her appointments.

This marks the largest deployment of integrated text messaging in British primary care to date.

The saving for the NHS with success in this area will be considerable. Imperial College estimate that between £240 million and £380 million could be saved with country wide use of SMS reminders.