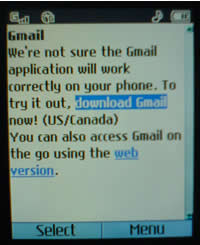 You’ve probably seen the news yesterday that Google released a new Java client for accessing Gmail from your mobile phone.

The majority of Digital-Lifestyles writers are UK-based, so we were feeling a little left out by being lead to believe by Google that the application was only available to those who live in the US. Google official press release contained,

It is currently compatible with all J2ME-enabled phones in the U.S. and works with a variety of carrier service plans.

When you pointed your computer Browser at the Web address given by Google to download it, you are indeed met forwarded to Google Mobile with no option to download Gmail Java Mobile.

Being the inquisitive little ferrets that we are, we jumped on to our ever-at-hand mobiles to try the same thing. Not expecting much, as we’re outside the US, you can imagine our surprise when we were given the option of downloading the app – but persisted with the US/Canada only malarky. We were warned that the app might not work correctly.

A little frisson of excitement hit the room (yes, it’s true) as the app flitted over the air, all 112k of it. We were met with the gmail login screen, which after entering the relevant, we crossed our finger (nto before hand, have you tried typing with crossed fingers?).

Argh .. the handset we used fell at the final hurdle, but we pressed on with some others until success! We checked in with Cristian Streng to find out he’d had success too using his Nokia E50 in Romania.

We can confirm that the app is a big improvement on the previous browser-based version with the number keys being used to carry out commonly-used functions.

So non-US, Java-mobile phone carrying, gmail users – with a desire to get your mail on the go (phew), you can rest assured that you can get access to it.

Gmail Java Mobile From your mobile phone browser of course.