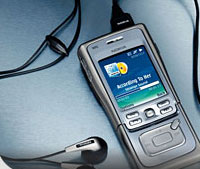 “The technology is completely ready, and the change in consumers’ habits has started. The best evidence is our sales number. We are selling huge amounts,” he added.

Nokia’s sales figures certainly dwarf those of Apple, who sold 8.7 million iPods in the last quarter – a high enough figure to keep them at the top of the dedicated music player charts, but still way behind music phones.

Although two out of three consumers with suitable equipped phones are already using them to play music, Nokia insists that Apple is not a competitor (well, not until their highly anticipated iPhone hits the shops).

“The comparison with iPod is wrong; it is a single purpose device, and it is not connected,” Mustonen said, adding that he believes that Nokia’s current rivals are, “companies which make multimedia computers.”

One of their rivals is most certainly Sony Ericsson, currently the world’s fourth-largest handset maker and feeling chuffed with itself after flogging 15 million Walkman music-playing handsets in its first year.

The overall European mobile phone music download market is expanding faster than Mr Creosote at a dinner table too, with Forrester Research predicting that the market is to grow to 674 million euros ($857.5 million) in 2011.