Nokia is to have Mission Impossible 3 released on memory cartridge in parallel with its releases on DVD – making it the world’s first mobile premiere.

The complete film will be on a 512Mb miniSD card, running at 25fps and be exclusively available with the N93. As of next week purchasers of the N93 will get the film included.

Given the gadget fest that M:i:III is, it’s pretty appropriatte.

It’s a European deal between Nokia and Paramout Pictures, making it available in the UK, Finland, France, Germany, Hungary, Ireland, Italy, Portugal, Spain and Turkey. The content will be protected, so it cannot be watched on a PC or transfered to another memory card, 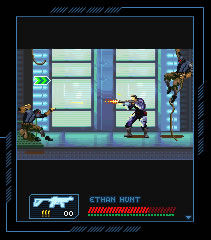 Nokia has been trying very hard to its launch, this is the first deal to link it with watching films.

Tuula Rytilä-Uotila, director of Multimedia at Nokia buzzed, “With this package, we want to highlight that the Nokia N93 is not only a fantastic movie-making device, but that it is also a portable video player, allowing users to enjoy movies wherever, whenever.”