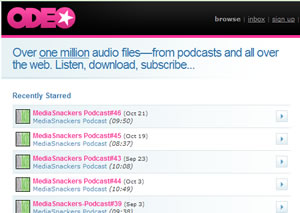 Odeo, the audio blogging company formed by Evan Williams of Blogger fame, has been bought by one of its founders, Evan Williams.

He’s formed a new company, Obvious Corp, with a number of people he worked with at Odeo, and used his own money to purchase all of the assets Odeo and Twitter, placing them in Obvious Corp.

Evan plans that the organisation will be compact and fast acting. Building a number of Web-based businesses that mutually support each other, passing traffic and users amoung themselves.

Background on Odeo
Starting a couple of years after Google bought Blogger, Odeo provided tools to help those wanting to create podcasts – the intention was to replicate the success of Blogger in the (then) forthcoming world of podcasting.

Evan formed Odeo with what was originally his next door neighbour, Noah Glass, in the days before Blogger was bought. Noah had started a Web service called AudBlog which let people post audio recordings to their blogs using a telephone.

By Evan’s own admission, Odeo lost its way and he’d taken a long, hard look at what he was up to.

Odeo had plenty of money in the bank. We could have held out for a couple years. But we had to look at the risk and the opportunity cost. Just because we could spend the money doesn’t mean we should. Did it seem like continuing on the path we were on would be the best use of both the money and the time of everyone involved? It did not.

Odeo was started with a $5m VC investment from Charles River Ventures and a number of angel investors. It’s understood that they have regained their original investments.