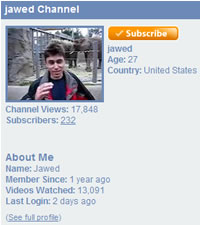 There’s bound to be lots of these stories floating around the Valley, as companies started getting bought for large sums of money. It’s going to be the equivalent of being/claiming to be the fifth Beatle.

We feel it’s more likely that this one is true as it’s covered by the New York Times.

Jawed Karim was the third founder of YouTube beyond Chen and Hurley we’re told. He was with them at PayPal, before it was sold to eBay, then at the very start of YouTube, throwing in

“They would often meet late at night for brainstorming sessions,” he continues, “Mr. Karim said he pitched the idea of a video-sharing Web site to the group.”

Beyond the early stages, Karim decided to not take a full time role there but returned to studying instead, for this he reduced his equity holding. After the sale, he’s still a very rich man. 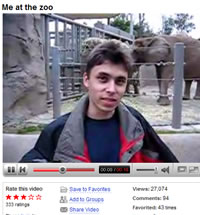 Living what he was building, “Armed with a video camera, Mr. Karim documented much of YouTube’s early life.”

If you’re a struggling entrepreneur reading this, there’s a very interesting section that Karim filmed in April 2005. Fellow founder Chen talked about “getting pretty depressed” because there were only 50 or 60 videos on the YouTube site. Clearly there are fallow times before growth.

It’s also amusing to see his own site where he’s listed his latest programs – “YouTube, My new company.”

The first piece of video ever put on YouTube.