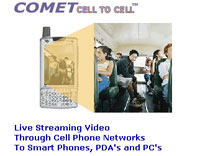 It wasn’t quite ‘citizen journalism,’ but a Fox News cameraman first on the scene of last week’s small plane crash into a New York Upper East Side apartment building managed to stream live footage to his TV network using a standard Windows Treo smartphone.

Scott Wilder was just twenty blocks away when news of the crash broke, so he hot-footed it to the scene, whipped out his phone and was able to report live from the scene using a hand-held Palm Treo smartphone.

The Palm Treo 700w-series mobile was fitted with special software made by CometVision, which lets users transmit video over non-3G networks, using a custom codec that uses much less bandwidth than would normally be required.

The software was set up to automatically connect to a computer at the Fox News studio with one button, and then send an e-mail to notify network producers about the live stream. 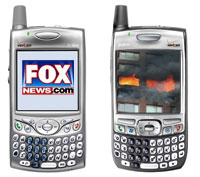 Not surprisingly, the live picture quality won’t be kick-starting a bumper blow-out of Fox’s broadcast cameras on eBay quite yet, but it’s a great example of how mobile technology is making newsgathering faster and open to more people.

Thanks to his phone, the Fox News cameraman was able to send streamed live updates from the scene long before rival networks were able to rock up with their snazzy satellite trucks, and opens up possibilities for more advanced citizen journalism in the future.