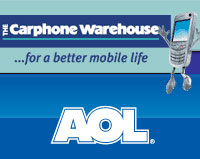 Carphone Warehouse have jumped into the big boy broadband rankings with its acquisition of the UK’s third-largest Internet provider, AOL UK.

Shelling out a cool £370m for the operation, Carphone Warehouse will inherit AOL’s 2.1 million UK customers, of which 600,000 are on dial-up, with the remaining 1.5 million using broadband connections. It’s four years ago that AOL announced their broadband pricing.

Under the deal, AOL will be keeping its (somewhat inappropriate) name – short for ‘America On Line’ – with the new owners retaining the US firm’s pricing policies.

(When AOL first hit the shores of Blighty, we did wonder if they’d change their name for the UK market, but we figured that UK On Line (UOL) sounds like someone being sick, and Britain On Line (BOL) would just invite the addition of ‘LOCKS.’)

Retaining AOL UK’s management and infrastructure, Carphone Warehouse said that it’s funding the acquisition of its shiny new toy through an extension of its existing debt facilities.

Although AOL UK is being sold by its American parent company Time Warner, the deal will see AOL continuing to provide co-branded portal, content and other audience services, as well as taking care of online advertising sales through a revenue-sharing agreement.

Carphone Warehouse head honcho Charles Dunstone announced that the deal was “transformational for our broadband business,” adding that they had “accelerated their customer service recruitment plans and incurred additional wholesale broadband costs.”

“The joint development of AOL’s already successful audience platform will bring us new advertising and content revenues in a proven and low risk manner,” he added.

Ol’Charlie boy’s been getting in the neck recently, after Carphone Warehouse’s TalkTalk service was the subject of a damning expose on the BBC’s Watchdog programme.

The show had been inundated with complaints after the company failed to deliver on its promise on ‘free’ broadband, and Dunstone has claimed that the strong demand has cost the company £20m more than originally expected.

The AOL deal sees the Carphone Warehouse crew slip into third place in the UK league table of residential Internet providers, with NTL the current leaders with 2.9 million home customers, followed by BT on 2.2 million.