ViaMichelin is the part of the Michelin group that designs, develops and markets digital travel assistance products. They already have a successful Website that uses information from the Michelin Guide allowing visitors to plan their travel and routes utilising the Guide info.

They have also moved into providing the information into other areas such as mobile and SatNav products, the latest being the X-980T Europe.

The X-980T has a bright 4.3 inch display surrounded by about a 1 inch plastic border, making the unit about 6 inches long and 4 inches deep. It’s just under an inch thick. It’s quite big, however it will fit into a pocket unlike TomTom, their main competitors.

The unit is due for release mid October and will have an RRP of £449.

Why get a X-980T?
It’s not the prettiest unit out there, but it comes packed with lots of features. There’s a complete set of European maps on the provided SD card, as well as the complete Michelin Guide which lists 51,000 European hotels and restaurants and the Green Guide which has 19,000 tourist and cultural sites. There’s quite a bit of information about the entries including the guide’s rating.

It uses the latest Sirf Star III GPS receiver, which acquires satellites quickly and maintains a lock on them. While testing the unit (inside a bus, in central London) it managed to lock on to 6 GPS satellites which is pretty good.

The system also comes with an RDS/TMC traffic decoder built-in (it needs an external aerial for it to work though) allowing it to update traffic in real-time without paying for any subscription services. The navigation software can be set to prompt the user if a traffic alert comes in that will effect the route, or it can automatically re-navigate to avoid the problem.

There’s also a speed camera database for the UK (which isn’t actually available yet, but will be in late October) and other countries. Again it’s included in the price (as are updates).

Bluetooth is also included and the system will act as a hands-free kit for a Bluetooth enabled phone. This also ties in well with the Michelin Guide information, by choosing a restaurant the system can navigate there, and as the phone number is also included – dial through the phone and you can reserve a table.

The voice directions are pretty normal, but there’s also a text to speech engine which can be used instead which will read out the names of roads and points of interest (in the language the device it set to).

An “infinite” number of stop-offs may also be included in a route for visiting all those tourist attractions. 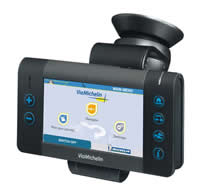 Overall Verdict
Even as a straight SatNav it boasts a lot of extras, like the included subscription free traffic and camera databases, but it’s the Michelin Guide that makes it something different. However that won’t appeal to a lot of people just working out how to get from A to B. If it’s going to be used for business or fleet use, or planning a holiday, then the Guide may prove invaluable.

The screen doesn’t seem as crisp as on some SatNavs, but it’s definitely pocketable so could be used when leaving the car and navigating somewhere on foot.

Though it’s a good unit, it’s just not quite ergonomically right.