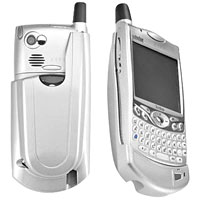 Although we’re not alone in thinking that the Palm Treo is the best smartphone around, the device suffers from one tragic omission; Wi-Fi.

For reasons best known to Palm, the promised drivers for their 802.11 Wi-Fi SD card never materialised, leaving Treo 650 users looking like chumps when the Wi-Fi gang were in town.

Enfora to the rescue
Seeing a sizeable hole in the market, Texas tech company Enfora released a WiFi Adapter for the Treo, unusually shaped in a ‘sled’ design, bolting on to the back of the Treo rather than using the SD card slot.

Getting started
Tearing open the box with gay abandon, we found the adapter (smaller than we imagined), an AC adapter that conveniently offers four different international plugs, an installation CD and the flimsiest instructions we’ve seen for some time – just a tiny scrap of paper.

There’s also a custom battery cover for the Treo which has two slotted holes for attaching the phone to the sled. Aesthetes may be offended to note that it’s a different shade of silver to the Treo.

The unit must be charged for two hours before use, with a small amber LED blinking while charging. This turns to solid green when the Treo is connected to a Wi-Fi network.

Mac users will have to manually install the driver which is simple enough.

Getting connected
It has to be said that getting the WiFi Sled on to your Treo is a bit of a palaver, needing a dexterity akin to the Vulcan death grip.

Once you’ve changed the battery cover you have to pull the button on the sled, give the Treo an almighty shove downwards and then click the phone back into place.

The first few times we tried this, it took so much effort to pull the phone in and out of the sled we began to fear we’d end up breaking the thing.

Once wedged into the sled, we turned on the unit, clicked on the Wi-Fi icon on the Treo and ran the Enfora application to look for available wireless base stations (WBS).

As soon as you locate your network, you have to select ‘add’ to create a network profile and then input IP information and WEP passwords (if needed) and then hit ‘connect’ and you’re online.

Although this is fine if you know what network you’re looking for, the software for ‘sniffing’ connections is rather woefully Spartan, with no indications whether located networks are open or encrypted.

We did write to Enfora (who have excellent customer support by the way) and they said that they couldn’t justify writing a brand new Wi-Fi sniffer application for what is basically a niche product.

Using the Enfora Wi-Fi Sled
Although the Wi-Fi Sled is nowhere near as big as we thought, you’d still feel a right berk making calls with it attached, so a headset is a must (see our BoxWave Dual Handsfree Stereo Adapter review).

Happily, the Enfora has been designed so that you can still use the audio port on the Treo and there’s a microphone on the front of the unit so you can receive calls while surfing the web too.

Conveniently, the Wi-Fi Sled’s AC adapter will also charge the Treo when it’s in situ, so you won’t need to drag around two adapters on your travels.

Conclusion
It has to be said that although it feels a bit of a bodge, it actually works very well and for users who need to combine the slick functionality of a Treo 650 with the speed of a broadband Wi-Fi connection, the Enfora WiFi Sled is well worth the money (approx £106/$170).

Once connected, we had no problems hurtling through our email and whizzing around Websites and although the pocket-filling girth didn’t thrill, the additional battery life meant that it may prove far more practical for road warriors away from base for lengthy periods.

One thing: it looks like Enfora may be cancelling UK shipments in the near future, so get your order in quick!