Despite increased pixel counts rapidly reaching the wall of diminishing returns for consumers, Pentax have joined the trend for beefing up the megapixel ratings with their new Optio A20 compact digital camera.

Stuffing in a ten megapixel sensor, the A20 is an attractively understated lightweight compact which offers three types of anti-shake, a 2.5inch LCD screen and enough power from its two AA batteries to grab around 220 images on a single charge.

No shake, non rattle and non roll.
A new Application Specific Integrated Circuit (whatever that is) claims to serve up more image-processing power, with the camera unusually offering three different types of Anti-Shake functions.

The first, SR (Shake Reduction), is a proper stabilisation system that employs two gyro sensors to detect the amount of shake and an image sensor (CCD) that moves both horizontally and vertically to reduce the wobbles.

Pentax’s “Blur Reduction” mode uses the time-honoured bodge of whipping the ISO rating skywards (up to 1600) when the light goes low, at the expense of a lower 5M (2592 x 1944 pixels) resolution,

The third function, Movie Anti-Shake, helps reduce wildly oscillating video clips via software wizardry, with the process resulting in movies with a narrower field of view than during normal recording.

Pentax have also included their new Face Recognition AF & AE function, which claims to automatically detect the position of someone’s boatrace in the photo frame, adjusting the focus and exposure accordingly. 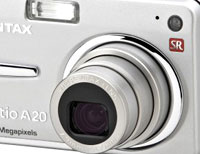 The Optio A20’s auto-tracking AF feature should help doting mothers grab photos of their little darlings as they run into walls, with the focus frame automatically following the movement of the subject inside the photo frame.

The movie capabilities of the A20 are pretty good too, with the little fella capable of grabbing 640 x 480 pixels footage at 30 fps (frames per second), captured in DivX (MPEG-4 compliant) movie format (not supported on Macs).

As ever, there’s a veritable flotilla of auto/scene modes covering Landscape, Portrait, Night Scene, and Program modes, with Shutter-Priority AE and Manual Exposure offered for the adventurous.

The Optio A20 supports two types of removable storage media – SD and the new SDHC memory cards, with the camera offering 22MB of built-in memory.

The camera should be hurtling off shop shelves in the US from October 2006, priced at around 350 bucks, while UK pricing and release dates will be announced at a later date.