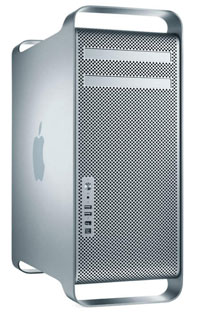 Apple has announced the new G5 PowerMac, a quad Xeon, 64-bit desktop workstation stuffed with two new Dual-Core Intel Xeon processors running up to 3.0 GHz which are claimed to deliver “up to twice the performance of the Power Mac G5 Quad.”

Apple says that there’s “more than 4.9 million possible configurations” of the Mac Pro available (who works out this nonsense?), with a new “direct attach storage solution” allowing snap in installation of up to four 500GB Serial ATA hard drives up to a total of 2TB of internal storage.

The machine offers support for two optical drives to simultaneously read and/or write to CDs and DVDs with space for three full-length PCI Express expansion slots and one double-wide PCI Express graphics slot. 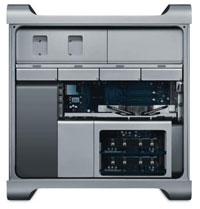 Graphics are taken care of with a NVIDIA GeForce 7300 GT with 256MB of video memory, with dual-display support.

Users keen to take advantage of the zillions of configuration options, can upgrade to beefier ATI Radeon X1900 XT or NVIDIA Quadro FX 4500 cards that both come with 512MB of video memory.

Known as “Leopard” and scheduled for launch in spring of 2007 (and thus failing to capitalise on Vista’s delays), Jobs teased the audience by saying, “There’s some top secret features we’re going to keep a little close to the vest.”

He did, however, reveal some of the new features the operating system, which include a ‘Time Machine’ option that automatically backs up a Mac, enhanced videoconferencing options, improved Mail and the bundling of the Front Row and PhotoBooth programs.