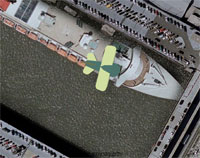 We love it when people adapt Google Maps to create fun new applications, and the “Goggles Flight Sim” is one of the best we’ve seen for a while.

After selecting your city from a drop down list (which currently offers London, New York, Paris, Toyko and Washington DC), you find yourself in charge of a cartoon biplane flying over a rolling landscape created by seamless Google Maps images.

The controls are pretty rudimentary, with keyboard arrows controlling direction and height, letting you sweep and soar around cities – and plunge earthwards in a kamikaze crash if you feel so inclined.

There are – not surprisingly – some rough edges, the most annoying being the inability to climb very high.

Without an accompanying map overview or sign-posted landmarks, this means it can be hard to work out where you are, which can be rather frustrating (we found that following railway lines or major rivers usually got us to the centre of cities in the end). 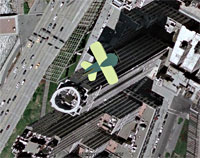 Still, as an office timewaster it’s second to none, and well worth a go.

We emailed Mark about his flight sim and he told us that it was still in beta at the moment, and that it wasn’t actually meant to be released quite yet.

He explains, “a mate interpreted ‘don’t tell anybody about it’ as ’email all your friends with a link’ so the cat got out of the bag before I finished it!”

Still, Mark acknowledges that, “all publicity is good publicity,” and we’ll look forward to playing with the finished version soon!