Vodafone is hotly denying that its enthusiasm for 3G has waned, after rumours began circulating that the operator was cutting handset subsidies and abandoned all hope of the technology ever becoming a lucrative commercial success.

What are your thoughts/actions about Video calling on your mobile? Take 10 second survey

Reports that the rumours began to circulate after Enders Analysis revealed that sales of 3G phones had crashed from 20 per cent of all handsets bought to a mere 12 per cent, in just one quarter, CNet tells us.

Vodafone insisted that the figures were “definitely an overestimate,” before the spokesperson engaged industry-speak overload:

“The share has dipped as we’ve rebalanced investment across our customer base. We’re now perhaps seeing lower ARPU (average revenue per user) from lower ARPU customers, so the kind of commercial investment we were making into customers is no longer justified.”

What this means in a language approaching English is that Vodafone is no longer keen to plough its own cash into subsidising 3G handset sales, because punters aren’t shelling out for enough of their extra services to make it worth their while. 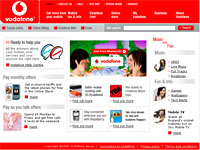 Video calling
Vodafone hoped that its 3G-equipped customers would be making use of what was supposed to be one of the great selling points of 3G, video calls, but yesterday the company admitted defeat, sighing, “Video calling is not a service that is used by a lot of people.”

Mobile TV
Mobile TV has, however, proved popular, with Vodafone claiming that, “more than 50 per cent of people who buy a 3G phone in our UK stores are taking a mobile TV package, and most are adopting the [premium] £10 package.”

This claim is rather at odds with the Enders report, which found that 76 per cent of all phone users surveyed said they had no interest whatsoever in mobile TV.

Alice Enders, the big cheese of the analyst firm, explained that this disparity may be down to the very small number of people using 3G services being the ones interested in mobile TV.

3G obsessed
Enders suggested that Vodafone’s “obsessive over-engagement in 3G” – reflected in the less popular 3G handsets sharing the same amount of store-space with non-3G devices – had led to the company suffering financially because most punters simply weren’t interested in anything other than voice and text services.

Not surprisingly, the UK’s only 3G-only network, 3, were quick to quibble about the claims, insisting that the wild popularity of their downloadable music and mobile TV services is proof positive that the demand is there – if the technology is marketed correctly.

Frothing like a cappuccino machine on overdrive, 3’s spokesperson insisted that, “Uptake is phenomenal and growing day by day…..We’re even rivalling traditional music suppliers. We’re second only to iTunes in terms of downloads… and the World Cup really put mobile TV on the map.”

The spokesperson went on to blame a “lack of maturity” from the other 3G operators, claiming that “some incumbent operators” had found it could “suit their commercial model to keep some of their users on old technology.”

With Vodafone rapidly cooling on 3G, it begs the question whether any of the operators who invested vast amounts of moolah on 3G licences and infrastructure will ever get to see their flthy lucre again.

What are your thoughts/actions about Video calling on your mobile? Take 10 second survey