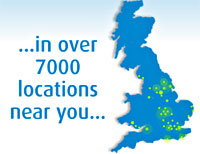 Talking to the BBC, James Saunders, chief marketing honcho of Wi-Fi suppliers, The Cloud, welcomed consultation from Ofcom, adding that the turbo-charged Wi-Fi could, “provide great opportunities in rural areas that are currently without broadband. It makes it much more possible to put up a wireless network.”

Current limitations on the strength of Wi-Fi signals in the UK makes it prohibitively expensive to provide coverage to sparsely populated rural areas, but cranking up the power would make it possible to reach far more users without breaking the bank.

The bigwigs and boffins at Ofcom are currently mulling over the pros and cons of three proposals.

The first would see wireless signals (which are restricted to a tenth of the power permitted in the US) in all parts of the UK; the second would see the power increase limited to rural areas only; while the third option would include a balance of the first two plans, backed by a code of collaboration to minimise signal interference.

City networks
Although most UK towns and cities offer outside Wi-Fi access through hotspots in cafes, pubs and libraries, city-wide seamless networks are yet to be established.

Known as mesh networks, these let Wi-Fi’d folks roam freely from hotspot to hotspot without any interruption to their Internet access.

Although such networks are already starting to roll out in the US, the restricted Wi-Fi transmission levels in the UK mean that mesh networks would currently be prohibitively expensive in the UK.

Selina Lo, chief executive of home Wi-Fi antenna firm Ruckus explained, “With lower power you have to use a lot more access points to form the network.”

“A typical network will have hundreds or low thousands of access points. If you have power limits, these nodes have to be closer together and you need a lot more nodes,” she added

Ruckus, who are currently working with Google to test a free mesh network in Mountain View, California, have developed a new Wi-Fi antenna to help home users connect to city networks.

“People running city networks know that the Wi-Fi in customers’ home equipment is not powerful enough to do an outdoor long range connection….our device is designed to bridge that connection,” said Ms Lo.

Interference
Although boosting Wi-Fi signals looks to be a top notch idea, it’s not without its drawbacks in urban areas, where US hotspot operators are already experiencing “significant” interference between suppliers.

Despite this, Saunders said The Cloud was committed to making mesh networks happen in the UK in the future, but warned that, “a number of factors are needed to make mesh networks economical”.

The company is, however, already working with the Corporation of London to deploy a mesh network in the City.