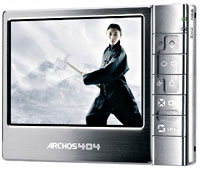 Details are still a little murky on this one, but some information on the upcoming range 404, 504, and 604 PMP devices are bubbling on up on t’internet.

Audio playback battery life is claimed at 15 hours, dropping to 4 hours with video.

Accessories ahoy
Archos are rumoured to be producing an optional DVR station for all the new units, capable of recording video from external sources using MPEG4-SP (DivX 5.0) with ADPCM up to maximum 640 X 480 @ 30fps)

As with previous Archos models, there also looks to be a range of add-ons being made available later, including a line-in recorder, USB host module, and camera.

The players are expected to ship in October, although Archos have made no official announcement yet.