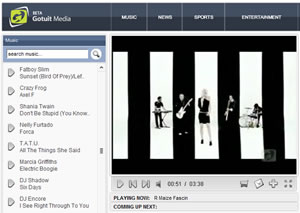 If you thought that YouTube was going to rule the roost forever in delivering videos over a Browser, think again.

Gotuit Media launched their service late on Sunday, and by the looks of it have got an awful lot right.

Their model is ‘offering premium video content from some of the most established content providers in the industry,’ so all of the commercial videos that are being pulled from YouTube then.

GoTuit has been tipped for a while, getting named as a finalist for the Red Herring top 100.

What have they got right?
The service is highly impressive. The videos load and start really fast. This is especially impressive as their quality is spectacular and rich. True, the site isn’t at anything like the number of views that YouTube has, but they’re currently beating the pants off them with startling speed.

Don’t be fooled, this site is about making money for the owners. It wouldn’t be surprising if the companies that own the videos that you are watching are being paid for you to be shown, or will be shortly. 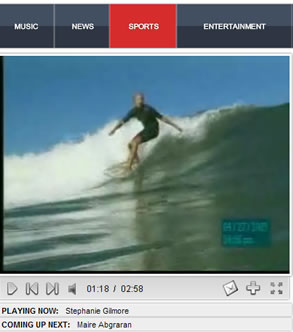 Every two or three videos that you watch will trigger the showing of a video advert. They’re currently running at 30-seconds, and I’d imagine that they’ll stay at that or less. Anymore and people will see it too much as a barrier to seeing the content they want. Most of the ads I’ve seen today have been for the Library of Congress

Commerce (buy now) button. Currently clicking on this brings up a search for the artist on amazon.com. It is slightly buggy today, but you can clearly see the potential.

Enough of the money side, what else have they got right?

Expanding the video to double the size is instant, with none of the restart issues that the YouTube player has. Small things like this improve the user experience considerably.

The content is pretty strong. TechCrunch is reporting that there’s 2,000 videos available at launch, with the plans to add more soon. The short films that they have on there aren’t the dross you often see on sites, they’re stylish and accomplished, see examples like Peep show.

What’s missing?
For me … I like to be in control of the media that’s playing, so a lack of timeline is a major draw back – it stops you scrubbing back and forth in the video that’s playing. This may be down to the magic they’ve used to get the video to play so darn fast, perhaps the downside of it is that you can’t control where you want to move in the video file.

We’ve spoken about the advertising as a means to income, but even understanding this, I find it annoying that there’s no option to skip adverts.

There will be lots of sites around with the majority of the videos this site is showing, so the one which gives that flexibility, will be the one people stay with.

The very least they should have is the ability to let them know if you like this type of ad/product or not, using simple thumbs up or down. At least that way they’ll get to understand a little more about you.

Summary
All in all, a very strong entry in the video market, which sets a pretty high bar for other entrants in the soon to be flooded watching videos online market.