We played with the Packard Bell EasyNote ‘Skype Edition’ Laptop, at its first European showing yesterday. The machine we used was the only one in Europe and had been jetted in from development labs in Estonia.

They claim it to be the worlds first ‘Skype Edition’ laptop, and we’ve no reason to doubt them. While many machines have been selling with Skype pre-loaded on it, this is the first to have a dedicated button built-in to the machine.

If your reaction is, ‘so what? It’s a laptop with a soft-button on it,’ that wouldn’t have been too dissimilar to our initial reaction – before we used it. After having seen it action, our view is more favorable.

Where’s the button?
Our first surprise was to find the Skype button at the top of the screen, where you normally find the catch. We’d expected it to be on or around the keyboard. As you can see from the close-up photo, the Skype button sits on the right, the microphone on the left and in the centre is a video camera, a la new Mac laptops. There’s an LED between the mic and video camera and another surrounding the Skype button.

How does it work?
The button performs various functions depending on what you’re doing with Skype at the time.

If you’re working on another app and feel the urge to Skype someone, pressing the Skype button, brings the software to the foreground. No big shock there.

When a Skype call comes in to you, pressing the button answers the call, bringing you live.

The green LED between the mic and camera shows solid green to indicated you have a call in progress, perhaps to save you from the embarrassment of slagging off the person you’ve just completed a call with, while thinking the call had finished. 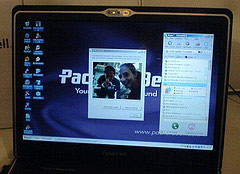 Calling quality
One of the concerns we’d had was the placement of the mic and the call quality that might bring.

We know that the mic on the Apple iBook lid is less than great to be using with Skype. We often find ourselves craning our necks forward, and half closing the lid to get close enough to the mic to make ourselves heard by the other party.

Packard-Bell appear to have got over this. In the call that we placed, the other end reported they could hear us perfectly well, despite us being around two feet away from the laptop and the room that we were calling from being pretty noisy.

On reflection we realised that the palaver we go through with the Mac wouldn’t work on this machine as, if you were on a video call, they’d be getting a view of your space bar.

Video built-in
As I’m sure you know, video conferencing has been included in Skype for a while now (it was one of the most requested features). By including the camera at the lid, Packard-Bell have made it easy to video call while on the move – without having to lash video cameras to the lid of your machine.

Having seen the preview window, we can report that the results were pretty impressive. The quality appeared to be more that sufficient for video conferencing.

General spec and availability
The general spec of this machine is described by Packard-Bell as having a “high-performance Intel Dual-core.”

We’ve absolutely no idea what the general computing function of this machine is – that’s not what we were looking at. Given that PC designs has been perfecting since the release of the IBM XT, we’d suspect that it’s pretty much as you’d expect.

The Packard-Bell EasyNote ‘Skype Edition’ is expected to be getting to retail in August this year at a cost of E899.