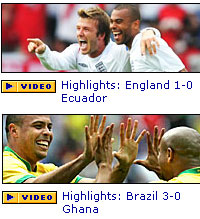 When it comes to World Cup football Web coverage in the UK, the BBC isn’t just dribbling past its rivals – it’s positively crushing past them, according to figures released by Nielsen NetRatings.

England’s dull-as-ditchwater victory over Ecuador in the first knock-out round pulled in the biggest UK audience to sports and gambling sites of all the matches so far, with one million users pushing the weekly audience to over 3 million for the first time.

This amounts to a hefty 58 per cent share of the weekly sports and gambling audience, with the official Yahoo FIFA World Cup Website coming over like a bunch of Third Division cloggers, managing only a fifth of that traffic.

Interestingly, the Sporting Life site proved the ‘stickiest’ with punters spending the longest time on the site (an average of 36 mins each).

Overall, the World Cup has seen a 51% growth in online punters visiting sports and gambling websites in the UK over the last four weeks.

The BBC added that when the worldwide traffic was added to the total, its overall sports traffic as high as three million unique users.