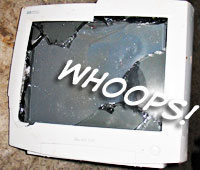 Something will go wrong sooner or later with nearly one-fifth of all notebooks, with a new hardware component needed to sort the problem, according to a new survey by industry analysts Gartner.

The fault could be something as minor as a broken latch, but the most frequent failures were major disasters like knackered motherboards and toasted hard drives – the kind of catastrophe that could turn mild mannered folks into screaming, blubbering wrecks of rage (we speak from experience here).

The picture is better for desktops, with just five per cent of desktop PCs purchased in 2005-2006 breaking within the first year, and only 12 per cent going AWOL within four years.

Although these figures look bad, they actually represent a 25 per cent decrease in annual failure rates for PC hardware over the last two years.

Laptops have also shown a significant improvement, with features like suspension mounting of hard drives and rubber bumpers between laptop lids and keyboards helping keep the damage tally down.

Busted screens
The most common disaster to hit laptops used to be the dreaded broken screen.

Improvements by notebook manufacturers – like adding structural rigidity to the casing and screen bezel and providing more space between the screen and keyboard on closed lappies – have happily made cracked and smashed screens less common. 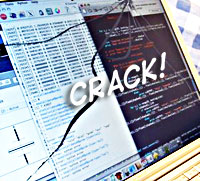 Motherboard fry-ups and hard drive breakdowns are now the two main sources of failure for desktops, a situation brought about by the increasingly complexity of the things, with more components being integrated into the motherboard.

Years ago, if a network card went down, a quick call to the coke-slurpin’, death-metal listenin’ IT spod guy would have the card replaced in a jiffy, but with the network card welded onto the motherboard, the job suddenly becomes a much bigger one.

According to the study, less common hardware failures include latches and hinges on the chassis breaking, keycaps disappearing into the ether and the time-honoured, “Whoops! I’ve just spilt coffee/beer/coke on my keyboard.”