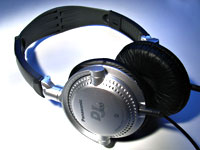 Although in-ear bud headphones are all well and good for strutting down the street with your iPod/PDA/smartphone in your pocket, when it comes to DJing or listening at home, you might need something a little more substantial.

If you’ve got deep pockets (and don’t mind looking like Biggles coming back from a WW2 mission), you can’t go wrong with the amazing Grado SR60 headphones (review June 2005), but if you’re looking for something cheap and cheerful, the Panasonic DJ100 headphones are worth a look.

Optimistically described as ‘professional’ headphones (yeah, right), the silver and black closed-ear headset is more of the cheap’n’cheerful variety, although the build quality seems pretty reasonable for a street price of around £18.

In case you’re not sure what this ‘closed-ear’ stuff is all about, it means that the headphones completely cover yer lug’oles, and thus reduce extraneous sounds interfering with your music. 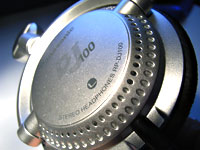 Designed for DJs
You’ll note the headphones describe themselves as being for DJs – this is due to their closed ear construction (a bit of a must for monitoring in noisy environments) and the fact that the individual earpieces rotate so you can listen to one earpiece without having to put the headphones on your head.

If looking like a DJ isn’t your thing, the ‘cans’ (as those in the music biz like to call them) felt comfortable enough when worn ‘normally’ with enough travel on the plastic extending headband to cover head sizes from a pinhead skinhead to a beehived big ‘ead.

There’s also a generous length of cable supplied with the ‘phones (around 2 metres) with a gold plated 2.5mm jack plug and 3.5mm adapter supplied.

A particularly nice touch is that the Panasonic RP-DJ100’s can fold up into an impressively small space, so that you can wedge them into your record bag or laptop case.

The sound
Naturally, at this price level you’re not going to get anything approaching hi-fi, but the RP-DJ100’s produced a sound that was neither too harsh or too overbearing, with the XBS Extra Bass System adding a bit of oomph which might come in useful when listening through a cheapo MP3 player.

The Panasonics were also capable of knocking out pretty loud volumes without too much distortion which is an essential attribute for Djing.

The verdict
Considering their build and price level, we were all set to give the Panasonic RP-DJ100’s top marks until the things let us down at a gig, when both channels cut out.

After some investigation, it seemed the phones had suffered the all-too-familiar problem of a dodgy jackplug, where the wiring had worked loose inside.

No problem we thought -let’s whip out the soldering iron and do a quick on the spot repair.

Annoyingly, once we’d removed the jack, ready for replacement, we found out that Pansonic were using the chuffing annoying lacquer coating cables (popular with Sony models), which are a ruddy pain to solder (see Headwize.com for solutions).

So after our own (paid for) headphones conked out after just four months and with no chance of a replacement after voiding our guarantee with the attempted emergency repair, we’ve had to rapidly downsize our enthusiasm.

We certainly wouldn’t recommend them for working DJs as we don’t think they’re up to the job. After all, if you’re serious about your playing, it’s defintely worth paying the extra for a robust, high quality pair. However, for bedroom-bound disk-spinners and iPodders on the move, they might be worth a look. So long as you treat them gently.