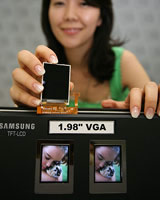 Mobile phone companies have been striving to develop high resolution displays to capitalise on the potential of multi-media content. This week, Samsung joined the growing list of manufacturers who have created a true VGA display suitable for mobile phones.

The 1.98″ LCD panel was debuted on Tuesday at the 2006 Society for Information Display International Conference and Exhibition in San Francisco. The screen uses the company’s proprietary amorphous silicon (a-Si) technology to achieve the same resolution as most desktop PC’s. It can display up to 16 million colours and supports extremely fast data transfer rates making it ideal for viewing video content.

According to Samsung, the screen has 10 times as many pixels per square inch as a typical 40″ HD TV meaning that your Big Brother clips will be rendered in super high definition.

VGA has been available on handheld devices for a while now. Toshiba debuted the first PDA with VGA display (the e805) back in December 2003 and the first VGA mobile, Sharp’s 904SH, launched in Japan in April this year. The latter has four times the resolution of the average QVGA (Quarter VGA) display and face recognition functions that authenticates users by their facial features.

All of this pixel-mania may be pleasing to electronics CEO’s and geek tech-heads but there are questions about the value of such high definition in such a small device. Higher resolution means greater pixel density which means smaller graphics. This doesn’t, necessarily, equate with ease of use. As one industry insider commented, “The fundamental issue is interface design not resolution. High resolution is primarily useful for viewing pictures – still or moving. Putting a Windows style UI (user interface) on a screen with a resolution greater than the human eye can detect doesn’t deliver a better product.”

Nokia has already had a stab at addressing this issue with their S60 browser Mini Map function which allows the user navigate around full HTML pages by zooming in and out. A feature which may point the way for future developments in interface design.