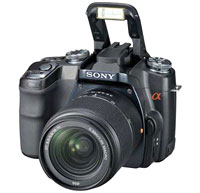 Some details of Sony’s eagerly-awaited debut into the dSLR market have begun to emerge online.

The camera is expected to carry a large 2.5 inch format Clear Photo LCD Plus Screen with AR coating and a resolution of 230,000 pixels.

This feature – inherited from Minolta -begins autofocus and auto-exposure as soon as it detects your peeper gazing through the viewfinder. Neat

Although there’s no firm details of pricing yet, some pundits are estimating a street price of $1,000 (body only) which places it in the highly competitive enthusiast market.

Other leaked details include an Anti-dust protection system (We like these – a lot!), 1600 ISO equivalent, Burst shooting, advanced flash modes and BIONZ Image Processing Engine.

We should point out that Sony don’t actually call it the ‘Alpha’ in print, preferring to use the arty squiggly symbol (a bit like popstar Prince and long forgotten 80s nobby band Freur), but we couldn’t be arsed to try and find that on our keyboards.

Sony is expected to make an official announcement about the Alpha 100 later this month, but if these tempting specs are on the money, Sony could be set to make a big splash in a market currently dominated by Canon and Nikon.