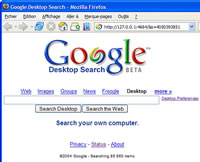 Google, a name synonymous with Internet searching, is now permeating the desktop. Currently it’s the PC (i.e. Windows environment) they’re moving into, but Apple Macs and even Linux are the likely next moves.

Microsoft (MS) has traditionally owned the operating system (OS) and many of the applications, but Google’s new tools allow searching in that space without having to directly access any of the aging empire’s software directly.

Google Desktop Search
The newest version (2) has the option of a sidebar or deskbar and searches can be entered directly into these. It also installs a search bar into Outlook. It’s possible to directly search items using these without ever going through the Windows “Start” menu. Whereas MS has had tools such as Lookout (actually produced by another company, which MS bought) which allowed searching in Outlook, it’s no longer needed as Google does a better job and searches more file types.

There are potential privacy concerns as Google will search Email, Chats, Web history, Media files, Text, Word, Excel, PowerPoint, PDF, Contacts, Calendar, Tasks, Notes, Journal and other files and send relevant info back to Google, however that can be turned off.

Once Desktop is started it sits there a while locally indexing the info and then searches are very fast, new files are indexed as they are created or arrive etc. 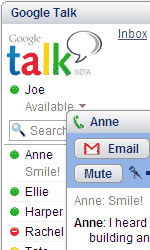 Google Talk
Though Google Desktop (ableit in an more limited form) has been around for a while, Google Talk is new and is their take on the Instant Messaging world.

The client is quite basic, it currently supports simple chat and voice. You need a Google Mail login to use the service (GMail accounts now support 2.5GB as standard) and it can check your GMail inbox. Chats can now be logged into the Google Mail system.

The voice quality is superb, Google have licensed some pretty good codecs (the software that translates analogue voice into digital form or vice versa) and it’s as good as Skype if not better.

Google Talk actually uses the XMPP open protocol (better known as Jabber) so any Jabber client can be used with Google’s server (including Gaim for various platforms and Apple’s iChat for Macs), though voice functionality is currently only available with their own client. However, that’s about to change as Google have released ‘libjingle’ a programming library which implements their voice services so others can incorporate them into their IM clients.

Jabber allows server connectivity to other networks and sure enough Google have just enabled this feature, so Google users can chat with Jabber users on other Jabber networks (if the other network connects).

Since the client is only v1, new functionality will be added as time passes, one can only wonder what but it’s likely they’ll be some form of search capabilities, maybe even adwords based on the conversations that are taking place.

Jabber itself has a lot more to offer itself, like conference rooms, which Google are sure to implement. 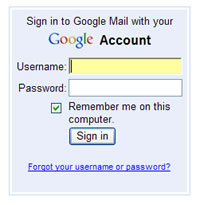 Google Mail
Another service that’s been around for a while (and again sparked heated privacy debates) Google Mail or GMail now offers 2.5GB of mail storage. The premise is you never delete mail, but just keep everything. All mail arrives in your INBOX, but then it can be sorted using various criteria and moved to various folders.

This concept isn’t new, DEC (Digital Equipment Corporation, now long gone) had this idea with their Altavista mail service, whereby all mail arrived in your INBOX and the client just put everything in the right place. Google just got it right and made it a Web service.

Some people will use all their space, but many struggle to use even a small percentage of it. An enterprising developer has made an application that allows Windows XP users to utilise it as a remote file store with drag and drop capabilities. There’s no guarantee it will keep working as Google can alter their systems at anytime. There’s a link at the end of the article.

Part two of this article will be out tomorrow.