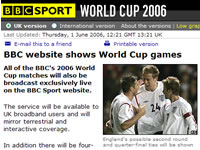 The BBC Sport Website will be carrying all of the World Cup 2006 football matches – Live. It will be only open to UK broadband users (or non-UK clever clogs who can set up a proxy or two).

Not content to having such a major, big ticket event being carried online, broadband uses will have the advantage of being able to listen to live commentary from Radio Five Live, while reading the kick-by-kick accounts in text. 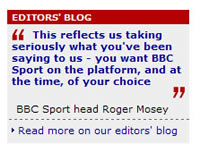 Panic in the network departments of companies around the UK will be settling in tomorrow morning as they realise quite how many of the employees will be sneaking a watch of the matches while at work. We suspect that bosses will be sanctioning, or possibly even buying TV for the staff to watch, rather than have their networks melt around them.

The BBC are keen to point out that this won’t be the first time they’ve shown football or even sports events online. The final of the Club World Championship between Liverpool and Sao Paulo was shown in 2005, as was the Athens 2004 Olympics. They also plan to stream Wimbledon for the first time this year.

While this is clearly a major headline grabber, we do wonder how many people will be actually be watching the games on their computer. What is more certain is that not many will be using it as their major TV source (except us of course). It’s more likely that they’d just run it alongside their TV.

The BBC isn’t having it all their own way. We know of several National newspapers and some local papers that will be sending journalists out to the World Cup to file video reports. This World Cup will be the most tech’d up so far.