Samsung has announced the imminent release of the world’s first solid state laptops, in the shape of the Q1,an Ultra Mobile PC and the Q30-SSD, a 12.1-inch screen notebook PC

Instead of the rattling old hard disk drives we’ve grown to love, Samsung’s new models will come with a 32-gigabyte flash memory as their main storage device.

Best of all, with no disks to spin up, there’s better protection against shock, 25-50% faster boot-up/sleep recovery times, longer battery life and no noise from whirring fans.

Sounds good? Well, check out the price before reaching for your plastic.

The Q30-SSD looks set to come with a mighty sting of around $3,700 US-equiv when it hits the shelves in Korea (only) from early June onward, and the Ultra Mobile PC will come with the same trouser tightening sting.

“The SSD laptops are targeting a different consumer group from conventional laptop users,” explained Samsung spokesperson Lee Seung-han. “And the price will go down gradually.” 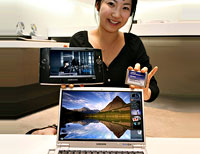 The company also said that it was only selling the SSD laptops in South Korea to reduce the risks from teething problems.

“The Windows boot-up time is significantly faster in the Hybrid Disk than in the Solid-State Disk, maybe because the SSD is still in its early development state,” he said.