OpenStreetMap, an organisation that is using consumer technology to create copyright-free maps, is meeting this weekend (5-7 May) on the Isle of Wight – to map the whole Island and give the data away under a Creative Commons license.

Driven by a united belief that mapping information should be free, the thirty plus volunteers gathered from the Isle of Wight, the wider UK, Germany and nine from Norway will be gathering their GPS kits, and taking themselves around the Island. They’ll be heading out in cars, on bicycles and on foot to explore the diamond-shaped, 22 x 14 mile island, covering the 147 square miles (381 square km).

“The Isle of Wight is a manageable size, one we believe can be mapped over the space of a weekend,” said Nick Black one of the co-ordinators, “Not only will the roads be covered, but the walkers plan to get as many of the footpaths mapped as possible too. This is a group effort.” 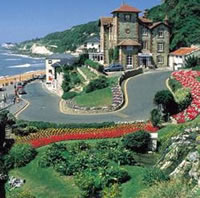 Once the GPS data is combined with notes of road names taken via audio recordings or even notebooks (shock horror), accurate mapping data will be put into the OpenStreetMap system for all to share. Quite different to the huge cost that the Ordnance Survey (OS) is asking for similar data.

Why so expensive?
We’ve always been unsure why the cost of licensing the maps of the UK is so prohibitory expensive. How much? Well according to the BBC TV show QI, the full Ordnance Survey (OS) map data of 2002, the most detailed map of Great Britain, sells for £30,000 for every town, or £4,099,000 for the whole country” (ref). Ouch!

Let’s be clear about this, UK tax payers money has been and is being used to collect and collate this data, but UK citizens and businesses are charged to use it. The Ordnance Survey argument is that it needs the money to maintain its high standards of mapping, employing around 350 surveyors as they do.

Strange, but we’ve not noticed the UK randomly shifting around during the night, so they’re clearly not remapping daily. What they are doing is seeking to obtain a 20cm absolute accuracy for their large-scale data. This will then be sold on to those who can afford it.

It’s not just commercial organisations that have to pay for accessing such information. On a parallel track, look at postcode and address information. As Charles Arthur and Michael Cross pointed out in their article in the Guardian, local authorities often collect much of this information and then have to pay to access that self, same information.

A local authority such as Swindon has to pay OS £38,000 a year to use its addresses and geographical data. It also has to pay the Royal Mail £3,000 for every website that includes the facility for people to look up their postcodes. Yet it was local authorities, which have a statutory duty to collect street addresses, that collected much of this data.

If you’re not submerged in this world, it may surprise you to find out that the United States actually gives its mapping data away for free. So through agents like Navtec, and Teleatlas, it ends up on applications like Yahoo & Google maps. Innovation like that isn’t possible in the UK as it falls at the first hurdle – that of huge expense.

We’re proud that we’d been knocking the same Isle of Wight idea around the Digital-Lifestyles offices for a while now. Our thinking, it’s such a perfect, containable location for technology experiments. It’s an area where trials can be carried out, proven, then expanded to wider areas.

Wake up and smell the technology
Here’s the stark reality – technology in the hands of enthused members of the public is changing for ever the business models in many areas. Movements like OpenStreetMap will succeed in mapping the UK.

Not only that but access to their data will be better that the current the OS offering. It will include additional information that the public has contributed such as photo’s, audio recordings, text descriptions, etc.

Organisation like the OS who do not let their data free will be be left clutching hold of something whose value has been severely diminished, if not zero’d.

Come and join in
Previously thought of as a sleepy backwater, the Isle of Wight is under going a renaissance, with an explosion of musical and artistic talent in wide abundance, much of it concentrated on a Victorian town called Ventnor (disclosure: We love Ventnor).

We’re going to be there and if you fancy a weekend travelling around a beautiful Island, then get in touch with OpenStreetMap via their wiki. There’s still time to get yourselves there and help change the world (a little) for the better – one step at a time.