Entertainment behemoths Walt Disney are planning on making hit TV shows like “Desperate Housewives” and “Lost” available as free Internet downloads in an initiative to haul in new advertising revenues.

A report in the Wall Street Journal says that the freebie will come with a sting: episodes of the ABC shows will contain commercial breaks that viewers will be forced to watch (until someone comes up with a ‘fast forward past this crap’ hack, of course.)

Episodes of the shows being offered will become available on the Web the morning after they’ve aired on TV.

With the Journal reporting that ten advertisers have already leapt on board – including heavyweights like Ford Motor Co., Procter & Gamble and Unilever – Disney hopes that the delivery of programs over the Web will turn into a right little earner. 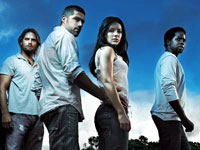 With digital video recorders like TiVo letting slogan-weary viewers fast-forward past the endless onslaught of adverts seen in the US, TV broadcasters are desperately trying to find ways to keep the advertising revenues rolling in.

Disney are hoping that their ad-stuffed free service – expected to be announced later today by the president of the Disney-ABC Television Group, Anne Sweeney – will prove a hit with both consumers and advertisers. 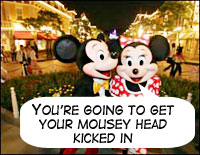 Punch ups in Disneyland
In a vaguely connected story elsewhere, we can report that Mickey Mouse’s chums are deeply unchuffed.

Or rather, the poor exploited workers lucky individuals on conveniently short contracts who get to wear the oversized heads and hands of Disney’s lesser characters at Hong Kong’s Disneyland.

It seems that they’re disgruntled with superstars like Mickey and Daffy earning extra wages despite them doing the same job (i.e. wearing a ridiculous costume and waving a lot).

The disgruntled employees have brought the union in, but we’re hoping it ends up in a fully costumed fight.