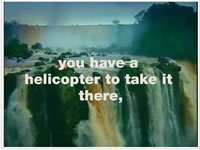 Companies are now starting to dip their toe into the world of Mashups/user-generated content – but when the user is generating it, the results might not always be what they expect or desire. We’ve seen a few examples of this today.

Uber-car maker Chevrolet – or their agencies – came up with a great wheeze. They’ve put tools on the Web to allow the worlds users remix and mash-up their latest Chevy Tahoe adverts.

It’s not hard to imagine the scene. The agency person, having hear from his ‘Geek’ source that mashups were ‘The Latest Thing’, over-enthusiasticly pitching it to Chevy

Some witty wags have used the Chevy tools to create adverts mocking the over-sized cars, the nature of their advertising and the company generally.

Selection of spoof ads
Roll-up, roll-up get them while they’re fresh (and before they get taken down by those that be).

Where’s My Helicopter? – This mocks the unreachable locations that car companies put their cars in for adverts, then proceeds to question if a 4×4 car of this size is really needed when they are, on the whole, only used to drive to the shopping mall.

Global Warming – The sights of this spoof are a little more ambitious – asking why the USA reaction to the threat of Global Warming is to make and sell cars like the Chevy Tahoe.

Flowers – This one addresses the over-sized, aggressive nature of the car. Summary – Where have all of the flower gone? Who cares? My truck’s bigger than yours and I’ll crush you.

We love the idea of corporate tools being used against those who are paying for they development, hosting and bandwidth, but suspect that corporate number two who approaches this may take a different approach. This won’t of course stop those who are angered by this type of thing using their own footage to the same affect.

Expect people in the marketing department to get fired over this one. People who run companies like Chevrolet don’t like to be made to looks foolish. Perhaps if they moved to destroy the planet a little less they’d get a better reception from the world.

Thanks to Holy-Moly! for the pointer to the videos on this one.

One thought on “When Corporate Mashups Go Wrong: Chevy Tahoe”