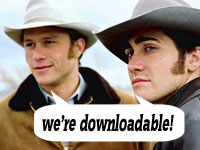 Hollywood has finally embraced the online movie distribution business with the launch of two new digital services that will make films available to download on the same day of their DVD release.

In a move designed to stave off movie piracy – estimated to cost Tinseltown up to 3.5 billion dollars a year – the two competing download services, Movielink and CinemaNow, have announced that they will be making hit films available to download online.

The company will start offering more than 200 movies for sale online, with Universal’s Oscar-winning “Brokeback Mountain” set to be the first major Hollywood blockbuster to be simultaneously released as a DVD and digital download.

Other films due to made available from Movielink are Peter Jackson’s “King Kong,” George Clooney’s Oscar-nominated “Good Night, and Good Luck,” the Johnny Cash story “Walk the Line” and the kids’ favourite “Harry Potter and the Goblet of Fire.”

Rival company CinemaNow has also announced that it will start making movie downloads available from Lions Gate Entertainment and Sony.

How it works
The system will let consumers shell out for a permanent digital film library of films, or rent downloaded movies for 24 hours.

Purchased movies can be permanently stored on a computer’s hard drive or saved to a DVD in Windows Media format for backup or playback on up to two additional tethered computers.

For road warriors, movies can also be downloaded to a laptop, with users also able to stream movies to a TV hooked up to a media centre extender or Xbox.

We take a look. And get annoyed
We thought we’d take a quick shufti at the two sites for more information but found Movielink’s site a real wind-up.

After wasting a few moments being forced to circumnavigate their irritating geographical filter (it won’t let you see the site unless your IP address is in the US) the company annoyed us further by insisting that we use ‘IE 5.0 or higher’ to access the site.

No thanks. We choose to use Firefox and resent being told what tools we should use. Oh, and their service is, apparently, Windows only. Grrrr..