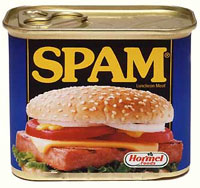 “Today’s state of the art in spam control solutions is far ahead of where it was, say, two years ago. Improved spam filters being available to more people — plus laws that allow the citizenry to penalise spammers — will cause the scourge of email spam to wither and die.”

Yes, it’s the issue of paid-for spam, as many have called it, as proposed by Goodmail. It’s been hailed, controversially, by American IT pundit Esther Dyson, who told New York Times readers that the “barrage of criticism” launched at the idea was wrong.

“These organisations seem to think that all Internet mail must always be free, just because it was free before. Yet they pay for computers and Internet access and office supplies, just like everyone else,” Dyson wrote.

Today, email expert Richi Jennings of Ferris Research retorts that the problem isn’t as bad as that. Where Dyson says “Pretty soon, all mail will cost money, but I think that’s only right…” Jennings says: “While we see a role for companies such as Goodmail, we don’t agree that ‘most’ email will cost money in the future, and it’s not ‘only right’ because the fact that email is free is part of its appeal.”

Dyson’s argument, says Jennings, “stands or falls on the assertion that today’s spam filters aren’t working. Jennings and Ferris Research think the opposite is true.

Time will tell, of course, but Dyson’s vision of the future is that there will be more and more Goodmail competitors.

The Goodmail idea is simple enough; you create a world in which only mail from known sources gets through. You and I, as mail users, tell our email system that if we don’t have someone’s name in the address book, then it’s spam. And our email system then says: “I’ve been given money to let this person through” and we say: “Well, I trust my email system.”

There is one reason to presume that this system is better; and that’s the sheer volume of spam today. In theory, anybody could send a viagra advert through the paid system – but it would involve a complete change in the way spammers finance themselves. They work on the assumption that they can as easily send six million messages as sixty million as six hundred million; and if only 0.001% of mails get a reply, they’re in big business.

Goodmail (and its rivals) reckon that they can turn that free six hundred million messages into something that costs half a million dollars to send. And they also reckon that we’ll find a way of ignoring the spammers, and that they won’t be able to break through.

It’s that last question that I’d query. Can we really make the world’s email system insist on authenticating all email? Or are we still stuck with a system which allows “spoofing” of mail, so that spam will simply arrive in our mailboxes looking like it’s from real friends?

Esther is definitely right about one thing. There’s absolutely no threat to anybody from Goodmail. Yes, it will mean that people will send advertising to you; but the problem with advertising isn’t just “it’s advertising!” – it’s the amount.

One advert a day, I probably won’t notice. It’s three hundred a day that makes email unmanageable; and no marketing operation can afford to send three hundred emails to every user on the planet every day, if it costs on a per-mail basis.

If Goodmail changes advertising from 300 a day to one a day, then nobody will mind. If paid-for mail still runs at 300 a day, people will drop AOL and other Goodmail customers, and move to other ISPs who don’t allow it. I’m with Dyson on this: the market will sort that one out.