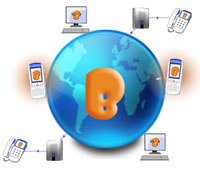 Now, we’ve all heard of free computer-to-computer services. We’ve even heard of calling from PDA to computers for free, but this is the first time we’ve heard of offering it free from mobile handset to mobile handset.

How do they do it? Surely there’s data charges involved with this? Short answer, no, as the phone handsets that work with this service must support WiFi – and Barablu have gone to great lengths of draw this to our attention. Simply get a WiFi-enabled mobile phone, put the Barablu software on and you’re able to chat freely to anyone else on their service, no matter what platform they’re on.

One of the difficulties of the service is that WiFi-mobiles aren’t that widely available currently. 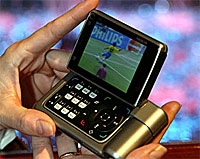 It’s as clear as the screen on your PSP that mobile phone operators aren’t very keen on ideas like this. Many commentators have claimed that the operators have gone a long way to trying to block the development and sale of WiFi-capable mobile phones – as the operators are terrified that it will erode the price of calls from ‘quite a lot’ per minute, to zero.

Mobile handsets that are currently Wi-Fi-enabled include the Nokia 9500 (Symbian Series 80), the new Nokia N91 and N92, the I-mate SP5, SP5m (Windows Mobile for Smartphone 5.0), and the soon to be available Nokia E60.

Like other VoIP offerings, Barablu offers the ability to call people on ‘normal’ landlines who aren’t on their network – at a charge.

Barablu does appear to have something unique here – at least currently. The difficulty they’re going to hit is the same for anyone trying to build a community of users and provide this type of service -it’s all about the number of people you can attract on to it. If people find their friends aren’t on it, or their said friends already have a similar service – the software will get unloaded and they’ll stop using it.

Best of luck to them, and we look forward to trying it out.