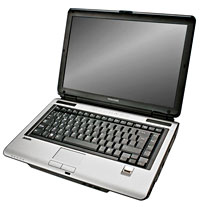 Toshiba is rolling out its first Satellite models with Intel Core Duo and Core Solo processors.

A handy Express Media Player lets users access DVDs or CDs without the palaver of booting up Windows. 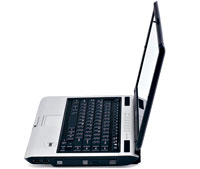 The notebooks include Intel’s 945 Express chipset employing Intel Centrino Mobile Technology to reduce power consumption while and give a kick up the backside of the laptop’s graphics to wireless performance.

Running on a choice of XP Home or Pro and fitted with 256MB to 2048MB of RAM , the new Satellite M100 comes in three colours, all with silly names: Peacock, Mist Gray and Sunlight Copper.

Qosmio G30 HD-DVD laptop
Toshiba have also announced their first laptop computer with an HD-DVD drive, due to be launched in April. 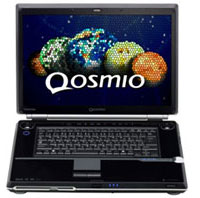 The Qosmio G30 is part is of Toshiba’s multimedia PC line and will come with a TV tuner and Dolby Home Theatre support.

Costing from $2,410 upwards, users will be able to watch HD-DVD content on the laptop’s screen or hook it up to a compatible high-definition monitor or television via a HDMI (high-definition multimedia interface).

HD-DVD is currently doing battle with Blu-Ray to become the de facto standard for high-definition content such as movies. 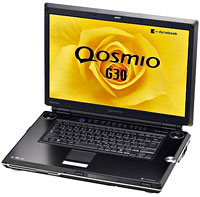 Backed by Toshiba and NEC, it faces heavy competition from the Blu-Ray corner, whose hard-hitting supporters include Sony, Matsushita, Panasonic and Samsung.

Although HD-DVD will initially only be offered in Toshiba’s expensive Qosmio notebook range, the company some models in the cheaper Satellite line may offer HD-DVD by the end of 2006.