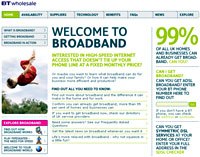 BT has announced that some of its users should be able to obtain broadband speeds of ‘up to’ 8 Mbps by the end of March.

It’s going to be a big job for the BT boys and girls, with the new services requiring the upgrading of more than 5300 exchanges, which together serve more than 99.6 per cent of UK homes and businesses.

All good news you’d think, but the new connectivity comes with a bag full of caveats related to physical factors, with only those lucky enough to live or work close to their local telephone exchange able to scoop up the maximum 8Mbit/s speed.

Although BT will be making the faster broadband speeds available to service providers for new orders from the end of the month, existing customers may have to wait “several months” until their lines are upgraded. In other words – loyal customers can go to the back of the queue.

BT’s line checker at bt.com/broadband is also being updated to show the expected speeds available for individual lines.