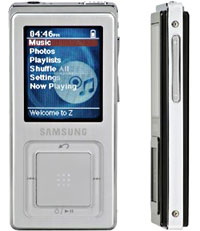 Due to hit the shelves in March, Samsung Electronics’ new YP-Z5 MP3 player is causing a stir because it was designed by Paul Mercer – the very same programming genius who created the interface for Apple’s runaway success, the iPod.

Samsung is confident that through his skills their YP-Z5 can succeed where a zillion ‘iPod killers’ have failed and make a real dent in the download music market currently dominated by his old employers.

Samsung is already making a big noise about the YP-Z5’s interface, which apparently offers super-duper transparency effects and other interface treats.

The Z5 is pitched directly against the iPod Nano and comes with a 1.8-inch colour screen and a claimed 38-hour battery life. 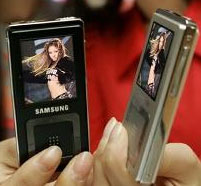 At $199 (~e167, ~£113) to $249 the pricing is similar Apple’s product, and – crucially – Samsung is promising a seamless connection between player and download service via Microsoft’s PlaysForSure digital music standard.”

Sadly, there’s no FM tuner to be found (an order-canceller for us), but it comes with photo viewing and DNSe Digital Natural Sound Engine 3D audio processing if that floats your aural boat.