In a reflection of the growing convergence between phones and digital cameras, Sony Ericsson have declared their new K800 and K790 phones to be worthy of the Cybershot brand.

Taking pictures on the phone is easy. Once you’ve finished yakking, turn the handset on its side, slide the active lens cover downwards and you’ll be presented with a ‘proper’ camera interface, similar to that found in Sony’s Cybershot models.

Using the 2.0″ QVGA 262K TFT display as a viewfinder, users can take advantage of the new BestPic technology, a fancy-pants burst mode which blasts out 9 full-resolution pictures in rapid succession.

Once the shutter is pressed, the camera presents the user with four pictures before and four pictures after the actual image was captured, with the option to scroll through the selection and save the ones that look best.

There’s also an auto red-eye reduction and PictBridge support for shunting your pics direct to a printer. 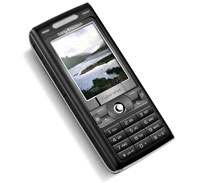 To help share your photographic masterpieces, Sony Ericsson have struck a deal with Google to enable easy photo blogging with the search engine’s Blogger service.

Photo storage is taken care of with onboard capacity for 100 pictures and a Memory Stick Micro expansion slot.

The near-identical K790i knocks a few quid off the price by eschewing the 3G and video, offering tri-band GSM with EDGE connectivity instead.

Other gizmos to be found on both phones include video recording/output, HTML browser, an e-mail client with P-IMAP support; an RSS reader, 3D gaming and a music player with MP3 and AAC support.

Both products will be commercially available in (ahem) ‘Velvet Black’ and start shipping globally during Q2 2006.

Sony Ericsson have also announced two additions to the K series along with a new phone in the Z range.

The K510i comes with a 1.3 megapixel camera phone, Bluetooth, push email and fun imaging effects (whatever they are), while the entry level K310i offers a VGA camera with practical tools for viewing, storing and sharing images.