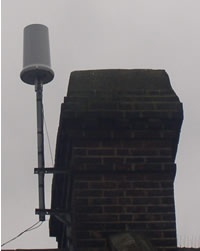 If you happen to be in Watford and are looking up at rooftops, you might see something resembling a inverted grey flowerpot stuck on some of the chimneys (see lovely pics). It’s highly lightly that these are basestations for a new wireless service that’s spreading through the town.

The service is called IP.District and is run by MCOM (MapesburyCommunications), who are themselves based in Watford. The pilot has been running a couple of months and we’ve been lucky enough to be the first publication to get the low down on it.

They have installed a couple of base-stations already, and are planning further to increase coverage to 3.5Km from the centre of town, and encompassing around 1,000 businesses. 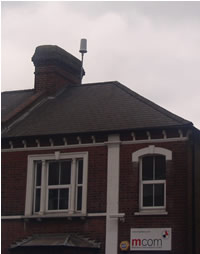 It’s based on a pre-ratified WiMAX standard and uses mesh networking. Thebase-stations communicate with each other, as well as end-users, providing resilience in the core network. If the wired connectivity from a base-station fails, it can re-route through another base-station, without loss of service.

The base-stations also support quality of service (QoS) so that voiceand Internet services can co-exist without interfering with each other, so voice quality will not suffer if Internet traffic increases.

Each base-station currently supports a maximum of 50Mb/s totalbandwidth which can be shared between up to 1,000 users (though inreality MCOM say the number of users will be much lower).

To increase the area covered, more base-stations are added which caneither join the mesh with more bandwidth, or just act as nodes to servemore end-users.

Connection is simple
To connect on is a breeze.

A small aerial is attached to the roof and a single weatherproof Ethernet lead runs to the inside of the premises. Other installations usually require a power lead be run to the ariel aswell, but as a Power over Ethernet (PoE) lead is used the MCOM installation only needs one cable.

Once inside, the leads simply plugs into a PoE injector and can connect into the rest of the network.

One major advantage this wireless service has over ADSL is that it’s asymmetric service, meaning the upstream bandwidth is the same as thedownstream – ADSL receives more bandwidth than it can send. Symmetrical bandwidth may not mean much for casual Internetbrowsing, but is important for business and when offering voice services.

The initial service is being offered at 1.5Mb/s, 3M/bs and up, with the 3Mb/s costing £99 set-up and £79 per month. A significant saving on SDSL service offered at 2Mb/s by BT.

Voice
There’s an option for voice services, which can be bundled with the connectivity.

This is achieved by using VoIP to transport the calls to MCOM’s VoIP gateways over the wireless network. By keeping the voice traffic separate from the general IP traffic, the call quality is maintained.

Call pricing plans are competitive and varied. Customers can choose Pay per call, or a fix cost per line, with the latter including all landline calls.

Since the service uses VoIP, lines can be added as needed. The basic services can be plugged into existing an PBX/Keysystem, this can be extended all the way to a hosted IP PBX runand maintained by MCOM.

Questions of interference
There has been some bad press about WiMAX due to the limitedavailability of spectrum in the UK.

The MCOM system is potentially prone to interference from users of 802.11a kit as they operate around the 5GHz frequency band.

Don’t worry too much as this isn’t too common in the UK, primarily because its usage has been deemed by Ofcom to be illegal in the UK – but that doesn’t always stop people installing it.

So far this hasn’t been a problem but may in large cities wheremore people do already use 5.8GHz, with London coming to mind.

If interference does occur then Ofcom have the power to intervene,especially if the interference comes from unlicensed users.

Future
Watford is being used as a pilot and if successful, it’s likely you’llsee IP.Districts start appearing all over the UK. Other connectivityoptions are likely to be WiFi, so there’ll be a WiMAX core with localWiFi hotzones.

Bandwidth options will also increase as the technology improve.

We think this is an interesting service and will be keeping an eye on it.