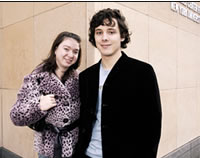 Inga Chernyak, until recently, had a legal clerk job at an IP law firm in New York City. On the 26 January she was called in to the firms HR department and fired.

Why does that make news in Digital-Lifestyles?

Her claim is that she was told it was because she’d appeared in an article in the New York’s Village Voice, discussing the Lawrence Lessig-inspired Free Culture movement. The article came out in the Village Voice on 10 January. She was fired on the 26th.

She also assets that they told her that her “views about what the firm does were incompatible with…what the firm does.” Her views on the expansion of Copyright laws are that they place overt restrictions on the population as a whole.

There may be those who think that it’s pretty obvious that is you work in an IP firm; wanting to train as an IP lawyer; you hold views that IP law is over restrictive; then have your name and photo featured in an article that starts by describing how to circumvent CD DRM protection and are a founder of NYU chapter of the Free Culture movement – you’re going to end up in trouble said IP law firm. Others cry foul.

Given how the blogging world works, I’d imagine that this incident will far from harm her career, and as she says in her own words, “as a member of the Free Culture movement, and a young woman of 19 without children to support, I can afford to take this blow in the name of progress.”

Take a stand against DRM? Get fired from your day job