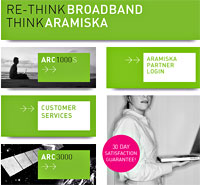 The sudden announcement left thousands of customers – including small businesses and numerous community broadband operations – without any access.

Using the Eutelsat Atlantic Bird satellite, Aramiska was able to offer services across five countries (the UK, France, the Netherlands, Ireland and Spain), with the majority being in the UK.

A message posted on the Website of the UK-based Internet company Ehotspot, which used Aramiska to provide satellite links, confirmed that the Netherlands-based firm had gone into liquidation.

Jon Sprank, eHotspot’s MD, explained: “eHotspot would firstly like to apologise to our customers for lack of service. This came as a bolt from the blue with no notice – we have suspended all billing to our customers. This has only truly been dropped on us and we are currently spending our time sourcing an alternative backhaul supplier

The disappearance of the Aramiska service is expected to have a serious knock-on effect for community broadband providers who provide “second mile” backhaul connectivity.

The Community Broadband Network (CBN) is organising efforts to help Aramiska customers find an alternative satellite broadband supplier, with their director, Adrian Wooster, commenting, “The Aramiska issue totally caught our members unaware, and is causing many problems for rural businesses beyond simple connectivity; the Aramiska service was also hosting many Websites and has been offering file storage capabilities for businesses.”

Although there’s no shortage of alternative satellite broadband providers in the market, smaller, shoestring operations may find it difficult to get their users back online quickly.

The closure reflects the fragility of some companies in the satellite-based broadband service market, which is coming under increase pressure in some areas from the increased availability of conventional wired broadband.

Despite this, large areas of Europe still remain on the wrong side of the digital divide, and reliable wireless and satellite services are needed across the European Union to ensure that all its citizens can keep up with technological change.