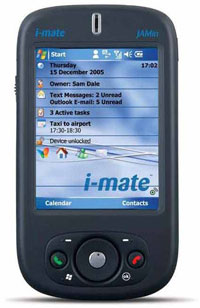 A week ahead of its scheduled launch, smartphone bigwigs i-mate have revealed details of their latest model, the JAMin.

Despite its name, the PDA/phone doesn’t come with Bob Marley ringtones or blow sweet wafts of ‘erb in the owner’s direction, but certainly offers redemption in the spec department.

Switching from a 416 MHz Intel processor to a 200 MHz TI processor (we know it sounds like it must be slower but they’re not directly comparable), i-mate have stuck with the JAM form factor, adding a different button layout and twice the ROM.

With Bluetooth 2.0 and 802.11g Wi-Fi connectivity onboard, there shouldn’t too much waiting in vain, with the PDA-style smart phone purring along on Windows Mobile 5.0.

Also known as the HTC Prophet (and O2 XDA Neo), the phone shouldn’t stir it up in the pocket department, measuring a compact 10.8 x 5.8 x 1.8cm and weighing 150g. Memory expansion is taken care of courtesy of a SD IO slot

Users looking to shoot the sheriff can take advantage of the two-megapixel camera – with macro shooting mode – fitted on the back of the phone.

We’re couldn’t get any positive vibrations out of the rubbish camera provided with its predecessor, the JAM, so let’s hope i-mate have stirred it up in the resolution department.