If you were to consider UK telecoms, media, and technology (TMT) policy since Parliament passed the Communications Act 2003 and brought about the formation of Ofcom much has happened. The regulatory machinery of the state has swung into action with relative efficiency, taking on such issues as BT’s marketplace position, digital switchover, and public subsidy and control of broadcasting and new media. And we are starting – just starting – to see the results of some those efforts.

But up until now, it is fair to say that the Conservative Party have basically ceded influence over the TMT policy arena to New Labour – not least because Labour has been the party of power during what has been a period of radical technological change. The Conservatives, for a number of reasons, have been somewhat ineffectual at making their voices heard in this space … leaving observers such as ourselves largely unsure of where the party stands on most issues impacting the TMT sector.

This is not a good thing. These industries are massively influential from a social and economic perspective. According to Ofcom, for example, the U.K. communications marketplace has an annual turnover of £55.9 billion. That’s tens of thousands of jobs and billions of pounds at stake. Policies applicable to the TMT sector also affect how the U.K.

What can we say? The TMT sector is already staggeringly important and will become more so as economies across the globe become increasingly interlinked through electronic communications technologies. So it is common sense that there be senior level engagement with technology issues across all political parties.

This holds particularly true for the Conservative Party.

However, any proposed policy and regulation must be backed by new thinking. So, although we have been told what sort of music David Cameron has put onto his new iPod, we don’t yet know how he thinks this technology might be used to deliver public service broadcasting or for that matter public services, or what the rights issues might be, and how all of this might impact the commercial market.

Of course there won’t be any answers overnight – and we don’t expect the Conservatives to suddenly unveil a raft of policy positions in what is a highly complex and constantly evolving area. But without doubt there’s a genuine and important opportunity here for the party. Developing a keen and critical understanding of TMT and proposing broad policies likely to harness the benefits that stem from new technologies would provide a platform that would assist the party in being seen as critical to delivering a modern Britain. 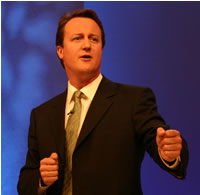 Certainly the party is already developing new ideas (or in some cases adopting the opposition’s cast-offs) in other policy areas. And by all accounts, David Cameron is doing an effective job of moving the Tories back toward the centre of British politics. The new leader appears flexible and open to new policy approaches. But nothing definite is happening in the TMT space. We think it should.

So with this in mind, we have decided that 2006 would be a good time to try and stimulate the political debate in regard to issues impacting the TMT industries by occasionally placing a specific focus on what the Conservatives might look to do for the sector. In doing this we hope to assess, encourage and develop thinking as to what the Conservatives have to offer if (and when) they return to power.

We will not be attempting to write the Conservative Party’s policies in regard to the TMT sector. Far from it – as always, we hope to provide a dialogue – a small impetus that might get a much bigger ball rolling. And any debate on would possibly include the views of those who may not be supporters of the Conservative Party – new or old. We remains open to all.

Tomorrow, in the second installment, we’ll get in to the details of what could get the ball rolling.

Luke Gibbs and Russ Taylor are founders of OfcomWatch