Casio have announced the European release of their super-slim 6 megapixel camera featuring an ‘Anti Shake’ DSP and MPEG-4 movie recording. 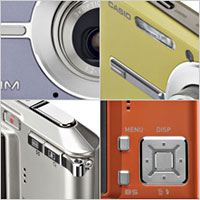 As the name suggests, its not a proper mechanical anti-shake gizmo – instead, the camera employs high ISO1600 sensitivity plus a faster shutter speed to minimize image blur.

The camera can record MPEG-4, VGA (640×480 pixels) video at 30 frames/second, with a ‘normal’ mode, letting users capture up to one hour of movies on a 1GB SD memory card.

Point’n’shooters will like the “Quick Shutter” function which provides simple and easy high-speed focusing, with 34 different “BESTSHOT” settings taking care of scene settings.

An improved battery allows up to 300 shots per battery charge, with the 2.2 inch LCD being “twice as bright” as previous models.

For charging up the camera, transferring images or connecting to a TV, the EX-S600 is plonked on its supplied multi cradle.

The cameras are available in a range of colours which the designers insist should be known as “Sparkle Silver”, “Mistral Blue” and “Latin Orange.”