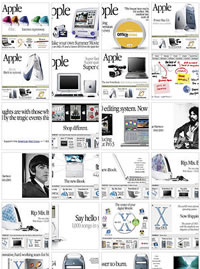 Kernel Panic has created a photoset on flickr collecting together many of the Apple.com home pages over the years. There’s quite a collection, running at 155 so far.

Clearly with that number it’s not fully comprehensive, so they’re calling for other contribution. If you’ve got any knocking around in your digital attics, best add them in and spread the love.

Apple.com home pages over the years