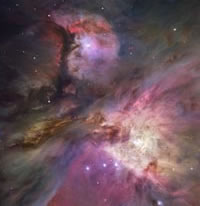 A huge photograph of the Orion Nebula taken by the Hubble Space Telescope has been released on the Internet. It is thought to be one of the largest images every produced.

The guidance on the download page, wisely suggest download the file rather than trying to view it in your Browser.

For those who don’t fancy downloading that, or for those on dial-up, NASA also provide a Flash-fronted version you can look at using your browser.

Around two years ago the previous version of this image was also distributed online, but that was a ‘mere’ 6,200 x 6,200, at that time, also claimed at the ‘largest image ever’.

Many have commented that trying to download the image has been a direct route to frustration, as space fans pile into grabbing it.

The Hubble Space Telescope is a project of international cooperation between NASA and the European Space Agency, not just NASA as many publication are reporting. Looks like NASA’s may be getting stuck with the bandwidth bill though.