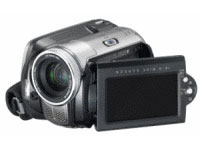 JVC has unveiled the flagship model to its extensive range of Everio hard drive camcorders, the GZ-MG77.

Going head to head with Sony’s recently unveiled Handycam DCR-S100 and Sanyo’s Xacti HD1, the GZ-MG77 serves up a hefty 30 GB of storage, with four different recording modes offering between 7 and 37 hours of video (approx). 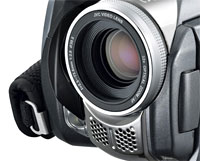 In the highest resolution mode, Ultra Fine, users can record 7 hours and 10 minutes of video at 9 Mbps.

The two high quality modes record at 720 x 480 pixels, with Normal and Economy being recorded at a lower 352 x 240 pixels resolution.

Video can be recorded in both standard and widescreen aspect formats, with an option to record stills.

The GZ-MG77 sports a 1/3.9-inch CCD sensor and auto flash, and comes with JVC’s Low Light Plus and 3D Noise Reduction technologies, which claims to reduce video noise by approximately 30%.

The camcorder is expected to hit the streets in March 2006, with pricing to be announced later.