After a flurry of rumours and speculation, AOL and Google have announced that they have sealed the deal on an extended partnership deal, which sees Google shelling out $1bn for a 5% stake in AOL.

Google were already providing the Web search technology to AOL, and their contract, which was due to expire in 2006, will now be extended by five years.

Previously, AOL had only earned a share of Google’s advertising revenues through Google’s AdSense program, but under the new deal AOL will now be free to flog both display and keyword-based advertising.

In a flurry of mutual back-scratching, Google have agreed to offer their technical know-how to ensure AOL sites soar up the search results rankings, with the company ensuring cynical punters that this will only happen through “fair and legitimate means.”

Google have also lobbed an estimated $300m worth of Google advertising credits into AOL’s overflowing pot.

Naturally, the synergistic shufflings don’t stop there, with plans being unveiled to make the two companies’ instant messaging tools work with each other and for Google to include AOL video in its video search database.

The deal seems to be a win-win for both companies.

Ad-based revenues and traffic from AOL accounted for a massive 10% of Google’s revenues (approx $422m) during the first nine months of 2005, and with the contract due to run out, Google were at risk of losing a major source of income.

Moreover, the deal sees Google becoming the only other shareholder in AOL along with Time Warner.

For AOL – who have seen subscribers dropping like flies as broadband grows in popularity – the deal gives them the opportunity to grab a slice of a booming market by acquiring the rights to sell its own online advertising. 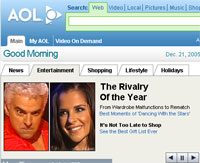 Sitting red faced in the corner and looking like a chump through all of this is Microsoft.

As the new boys on the block in the Web search market, Bill Gates’ boys were mustard keen to find a way to take on Google and Yahoo, and a deal with AOL would have given the company a substantial leg-up in the market.

Microsoft were reported to have originally approached AOL, waving a fat wad of investment cash and a new search technology contract, but their failure to secure the deal now leaves the company miles behind the big boys.